A historic building designed in the late 1400s, a former 17th century convent, housing one of Florence’s most beautiful and well-known gardens and filled with centuries old plants and statues, the Four Seasons Florence can be found in one of the city’s most beautiful and historical buildings.

The interior perfectly blends traditional Florentine style with a modern twist with its use of colours in sumptuous silks and damask curtains mixed with floral upholstery and guests will instantly be transported to another time with the hotel’s Florentine beauty. 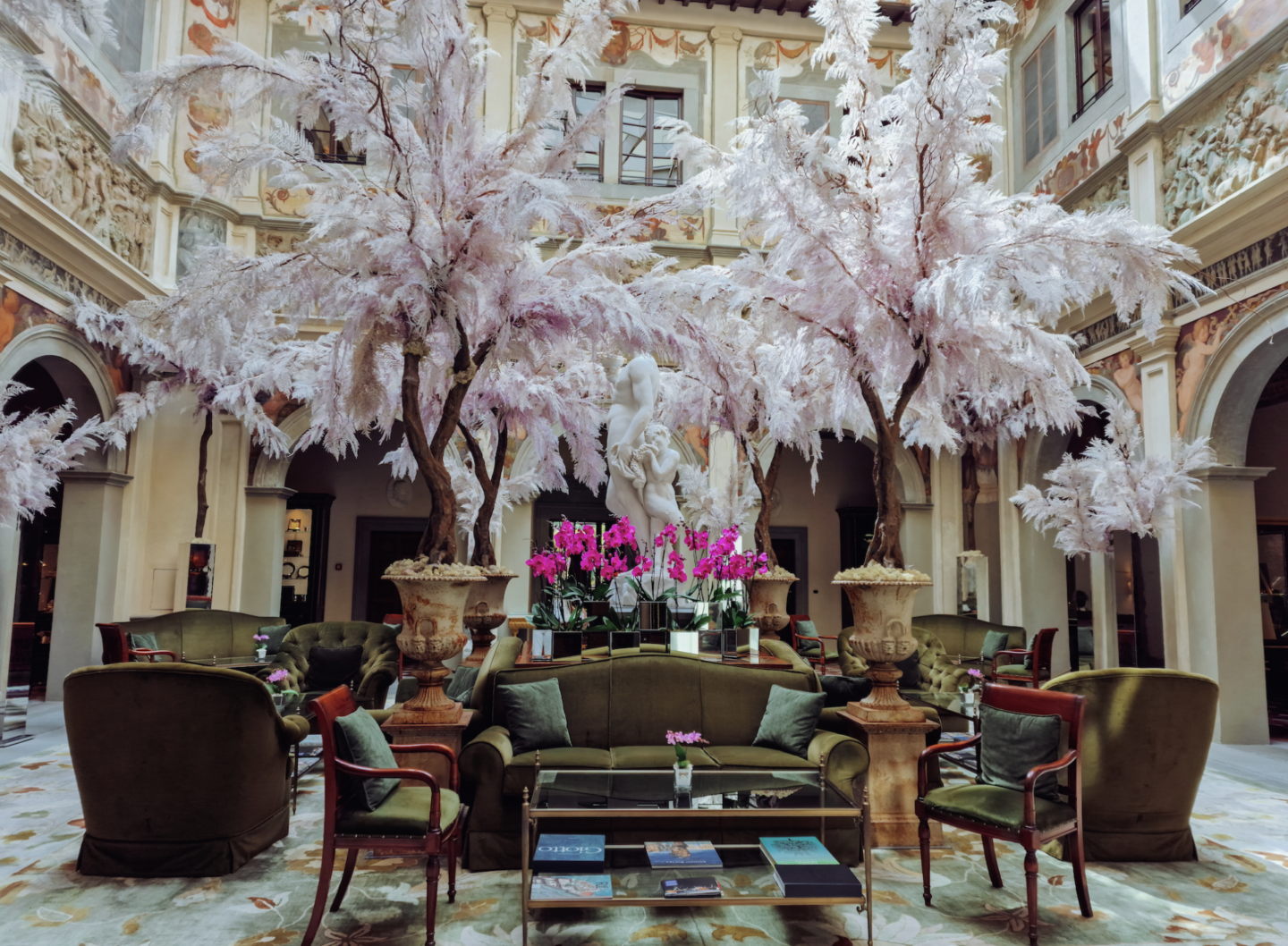 The grandeur of the 116-room five-star hotel is deeply rooted in the magnificent buildings which house the hotel as a whole and date back to the 15th century. Starting from Palazzo della Gheradesca, which immediately gives anyone walking inside the stunning lobby the feeling of entering a world rich in history and storytelling. The lobby which was once the building’s main courtyard – features an intricate and unique work of bas-reliefs and stuccoes inspired by classical and mythological scenes – created by Bertoldo di Giovanni, who was one of young Michelangelo’s teachers.

One of Florence’s most exquisite hotels, blending Renaissance-era luxury with hallmark Four Seasons service, guests have exclusive access to the Giardino della Gherardesca, an 11-acre private garden that is one of the city’s largest, as well as several restaurants including the Michelin-Starred Il Palagio, an outdoor pool, and a serene spa. 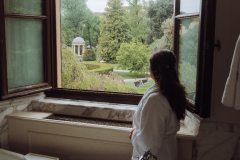 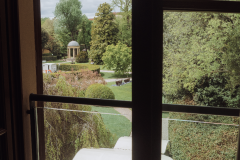 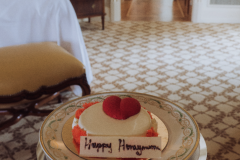 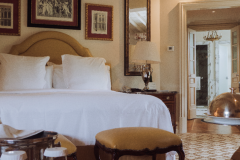 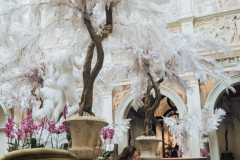 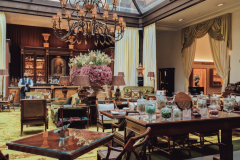 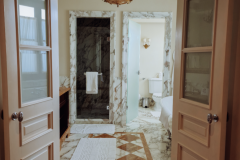 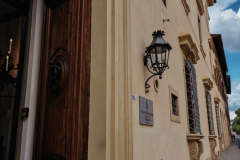 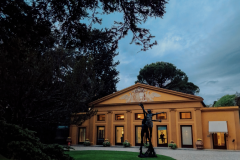 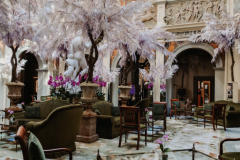 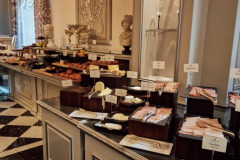 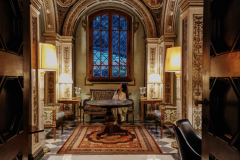 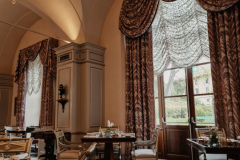 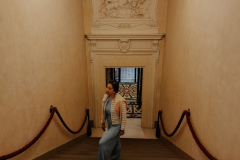 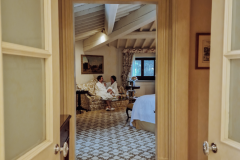 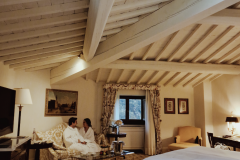 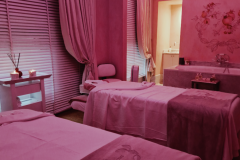 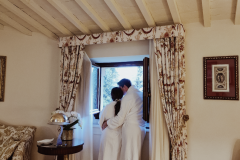 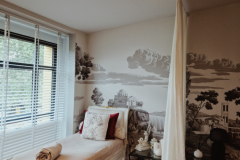 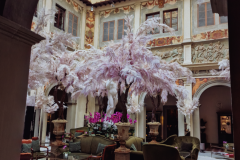 Despite the hotel’s location on the city’s northeast side, most sights are still within walking distance. If you don’t want to walk, the hotel provides a complimentary shuttle service and bicycles for rent. Renting a car can be costly due to parking, but if you plan on seeing the countryside, it’s not the worst option, and the hotel gives licences for driving in the city centre to avoid fines.

Choose from two buildings at the stunning Florence hotel: the Palazzo della Gherardesca, a converted 15th-century palace, or the Conventino, a former 17th-century convent.

The luxurious and large guest rooms are housed in two different buildings that date back 500 years. The elegantly furnished spaces are decked out with the softest linens and views of the luscious gardens, and they all come with complimentary water, fruit, juice, tea, and coffee. The Villa, a separate building in the back gardens with its own reception and butler service, is more private.

The 116 rooms in the luxury hotel are all unique, with different dimensions and unique features including frescoes, bas-reliefs, skylights, ceiling art, staircases, fireplaces, and friezes. Each room has been carefully created by designer Pierre Yves Rochon, who also designed the sumptuous interiors of the Four Seasons Hotel George V in Paris and The Savoy in London, but you’ll see green and yellow palettes in many of the spaces, as well as a white marble bathroom in each.

The hotel’s gourmet offerings are many and varied and change according to what the seasons provide. New recipes and dishes continuously alternate on the elegant tables set with Flanders linen table cloths at the restaurant and under the garden’s trees, at the Atrium bar or Pool Tree Bar.

The Michelin-Starred Il Palagio, located on the Palazzo’s ground floor, is the hotel’s main restaurant and open to all, both hotel and other city guests, featuring a menu based on a meticulous selection of the best ingredients and preparation of traditional dishes with a creative yet elegant twist. The restaurant is also the location in which guests are served a lavish breakfast buffet and a la carte menu each morning.

Al Fresco is a Tuscan Trattoria that serves food outside, as the name implies. A family-friendly restaurant that serves pizza, salads, sandwiches, and other casual dining throughout the summer months by the swimming pool, from the Summer months between June to September. The pizzas are made by nationally renowned master pizza makers, according to traditional recipes, making any meal here simply unforgettable.

Whether summer or winter, one of the hotel’s favourites with Florentines and hotel guests alike is the Atrium Bar, with luxurious leather chairs, exotic patterns, and plenty of plants, the bar is a beautiful spot off the lobby with a Colonial explorer feel, famed for its inventive cocktails, delectable afternoon tea, and nightly live music.

Enclosed in a walled garden, the hotel’s 91-foot long swimming pool is located in the Four Season’s famous garden and during the summer, this is a tremendous benefit for all travellers looking to escape from the heat with the luxury of being able to split days between sightseeing and pool time.

The Four Seasons Hotel Firenze’s two-story Spa also offers panoramic views of the pool and neighbouring park, making it a worthy visit in and of itself as if the hotel didn’t have enough to offer already. The spa, which is located next to the emerald green outdoor swimming pool and jacuzzi, provides a tranquil haven away from the tourist crowds of the main sights.

Officina Profumo Santa Maria Novella’s products are at the core of the spa menu. Owing to the use of these top quality products and of a highly professional team of experience therapists, Four Seasons Firenze’s Spa has become a favourite among those seeking to take care of themselves and a place where hotel guests can relax and rejuvenate in rooms with views over the hotels stunning outdoor swimming pool.