I’ve long been an enthusiast for steakhouses and I had been desperate to try the infamous STK for quite some time, so when I was asked to review this trendy chain, I jumped at the chance.

Upon arrival, I instantly felt like I had tottered into a bougie busy city  nightclub which I used to frequent almost 10 years ago – pretty girls dressed in the tiniest of cocktail wear, dancing to music that could perhaps be turned down just a little, and men wearing their finest suits, ordering shots filled out the place.

It might not have given me the greatest first impression, as I’m not the biggest fan of the nightclub and shot drinking scene, but from the minute we were seated at our table until we left, we were made to feel like A-list celebs.

If you don’t mind a little noise and you’re looking for an exceptional menu, exotic cocktail list, and superb service, then read on to find out why you’ll want to book a reservation at STK London.

STK, which originated from the US, has seven restaurants across the pond and several in the UAE is exactly the sort of restaurant you would find Kim Kardashian or one of the Real Housewives dining in.

The London-branch is the first to have opened in the UK and is based on the ground floor of the 5-star luxury ME hotel.

Inside, the restaurant is decked out in polished steel, dark purple lighting, with dark wood and cream leather tables and booths. There are also huge vases of flowers dotted around, and the whole thing gives off a real VIP casino vibe.

Once we had taken a minute or five, to take in the vivacious surroundings (STK is perfect for those that love to people watch), we were ready to get serious about what we were really here for – the food.

As soon as we sat down, our lovely waitress presented us with a large complimentary brioche, covered in parmesan and served with green pesto dipping sauce. This was incredible and made for a brilliant start to all the other courses that were to come. 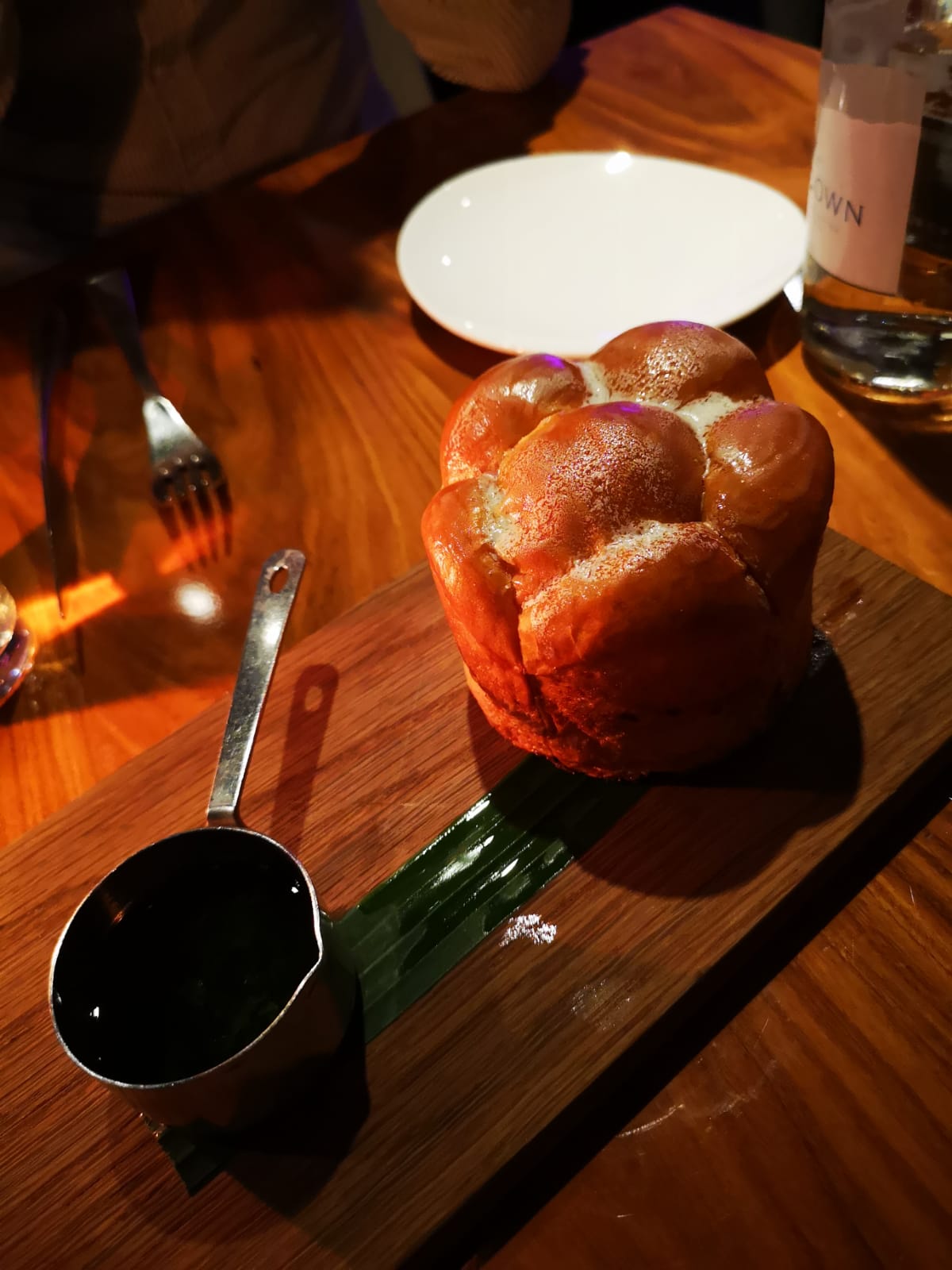 STK’s menu is extensive and primarily made up of steak dishes (obviously) with the grilled steaks separated into small, medium and large.  For those that don’t fancy steak, there are also a fair number of other choices, such as, Corn Fed BBQ Chicken breast, Twice Cooked Pork Belly, as well as several fish options; Seared Salmon, Atlantic Sea Bass and North Sea Cod Fillet. They’ve also got a variety of some of the best side dishes I had ever seen.

For starters, we opted for the Roasted Octopus Leg and Oat Fried Chicken along with the Yellowfin Tuna Ceviche – both of these options were my favourite part of the meal. The octopus was juicy, yet crispy and just perfectly cooked and presented, whilst the raw tuna was so fresh, light and drizzled in the most delicious tangy sauce. 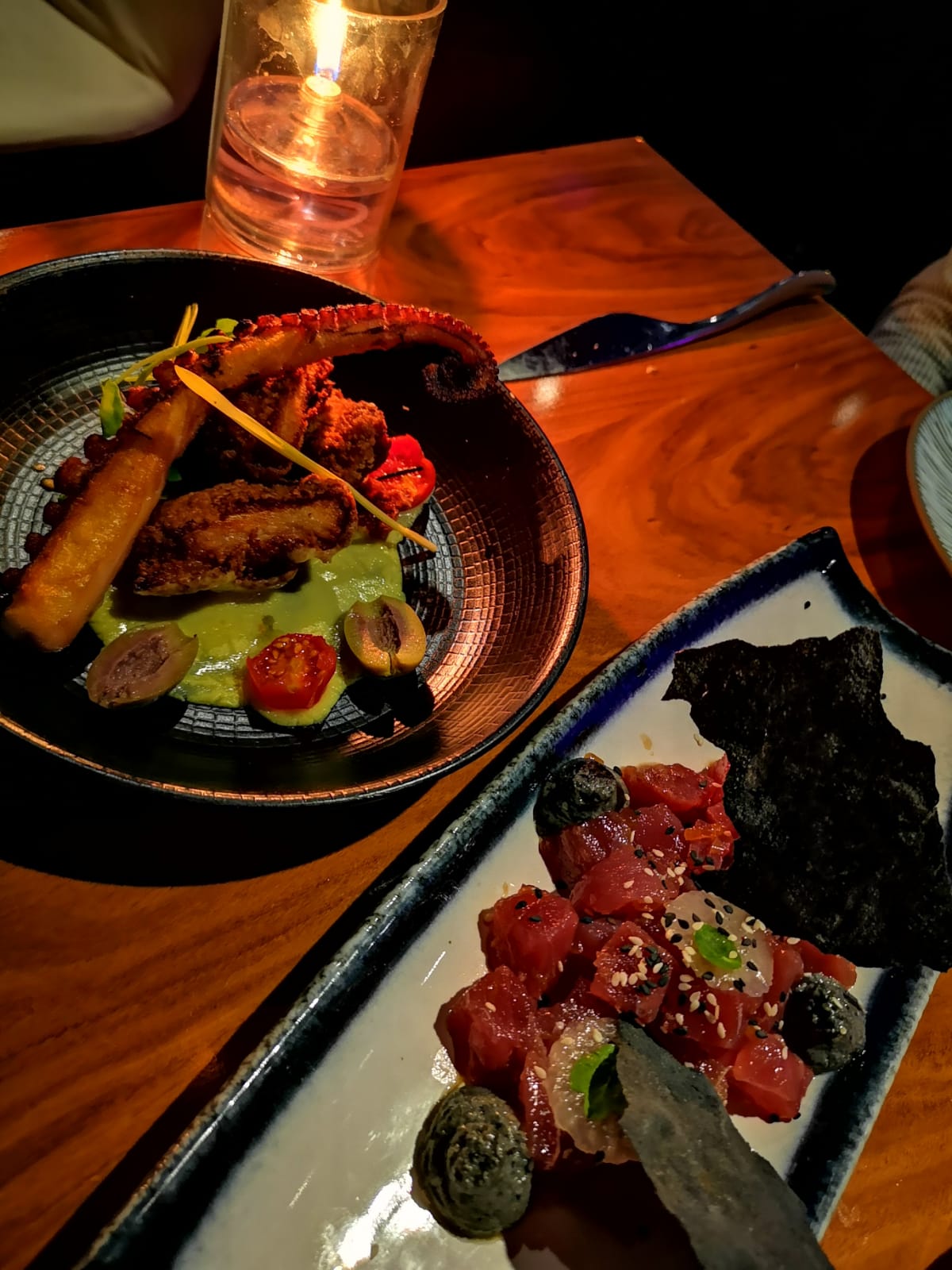 For the main course, we decided to take on board the recommendations of our server, and we went for the 750g Chateaubriand to share, topping it with a large lime and chili king prawn and smoked bacon and blue cheese. Sauce wise, we went for the STK bold – a slightly spicy house sauce and a good old-fashioned peppercorn sauce. 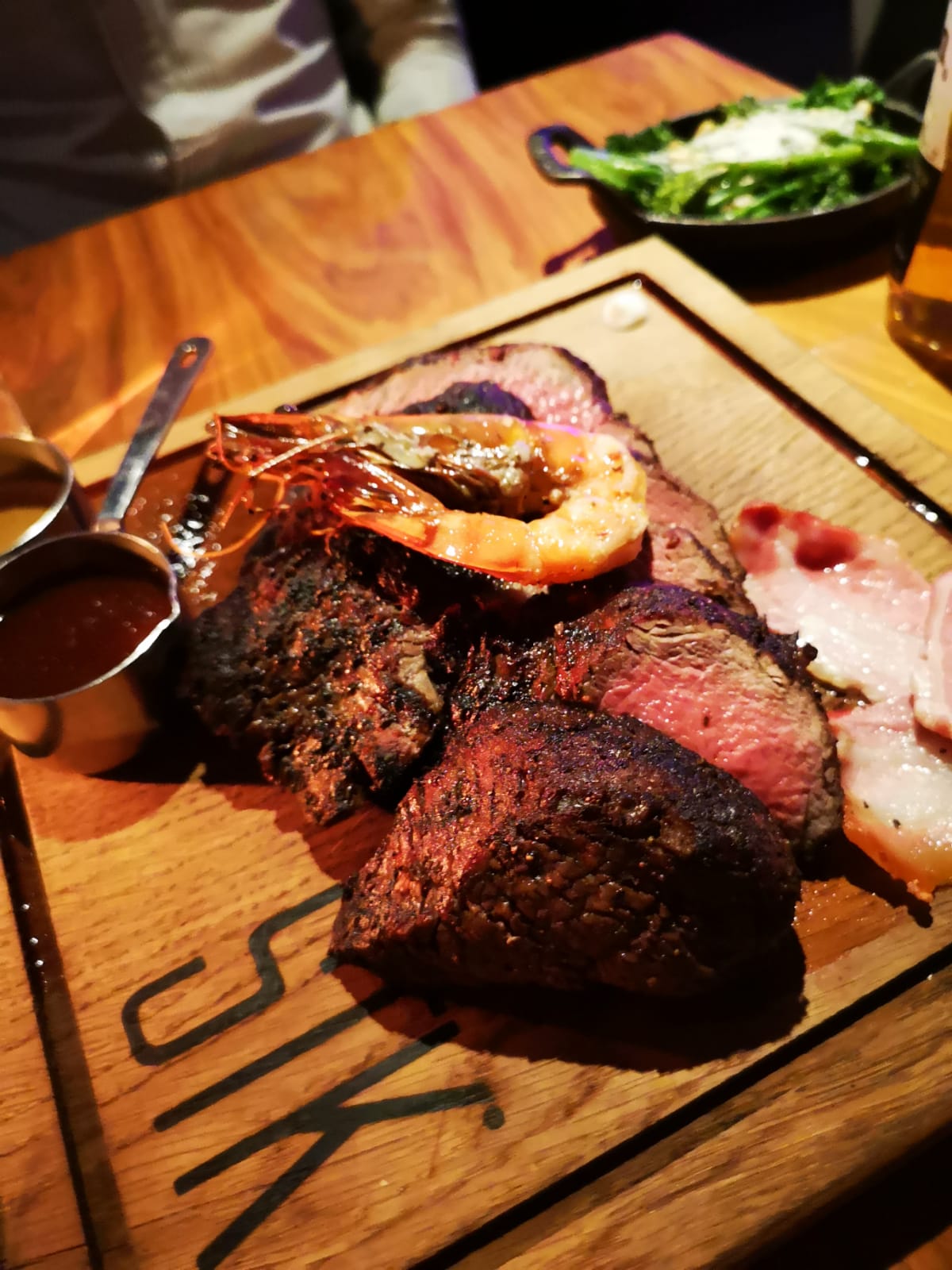 Our Chateaubriand was served on a large wooden platter and cooked medium-rare. My fiancé raved about it, saying it was cooked perfectly and “melt in your mouth”. I agreed but most of my attention was focused on the North Sea Cod Fillet, which we also (rather greedily) ordered. The fish was so flaky and fresh and served on peas puree with a tartare sauce. I know we were dining in a steak restaurant, but it was perhaps one of the best cod fillets I had ever eaten. 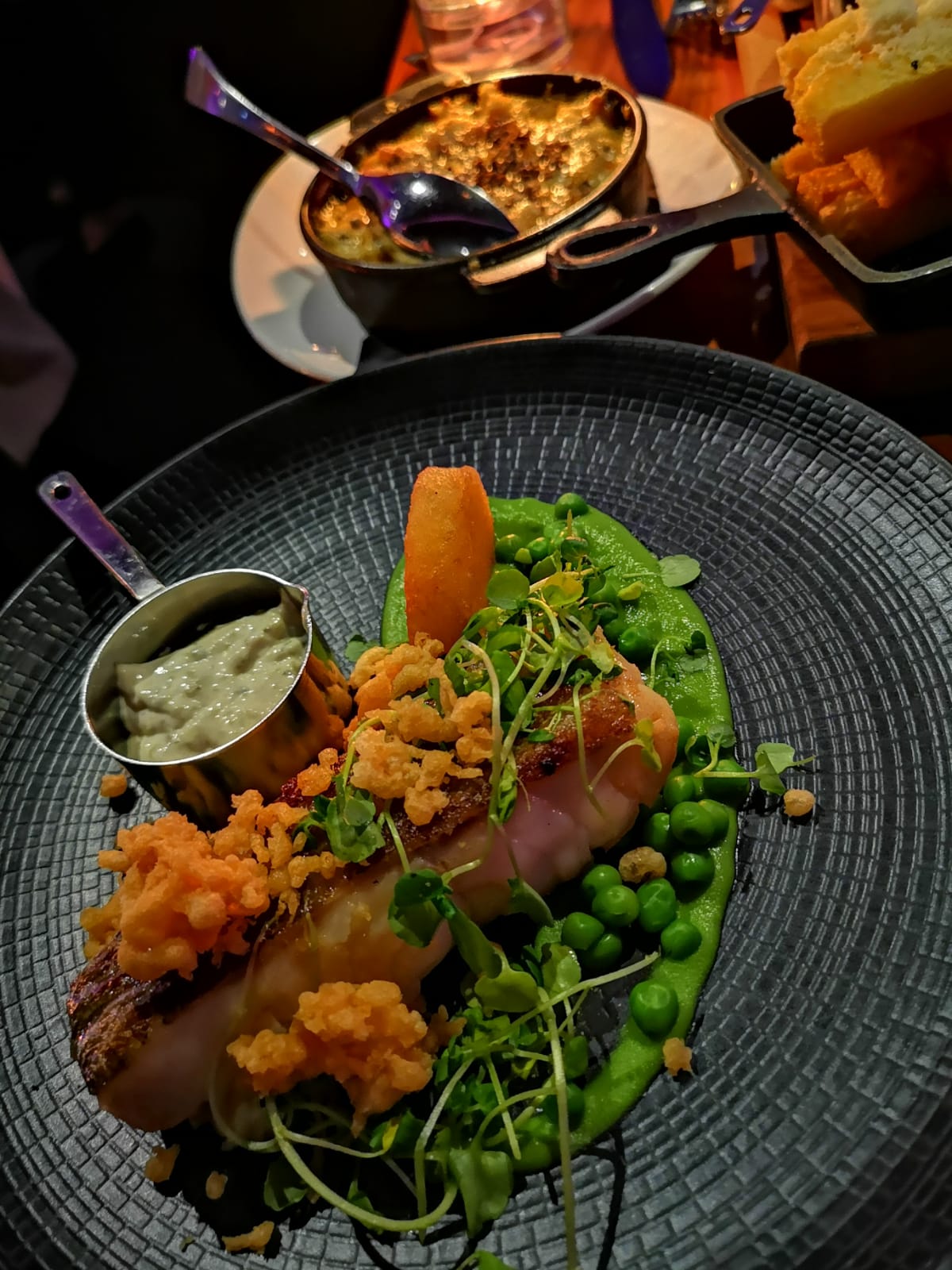 To compliment our main dishes, we chose three side plates, although this was a particularly difficult choice when I could’ve eaten every single option. We went for the Truffle Mac & Cheese, Roasted Broccolini, and Parmesan Truffled Chips. 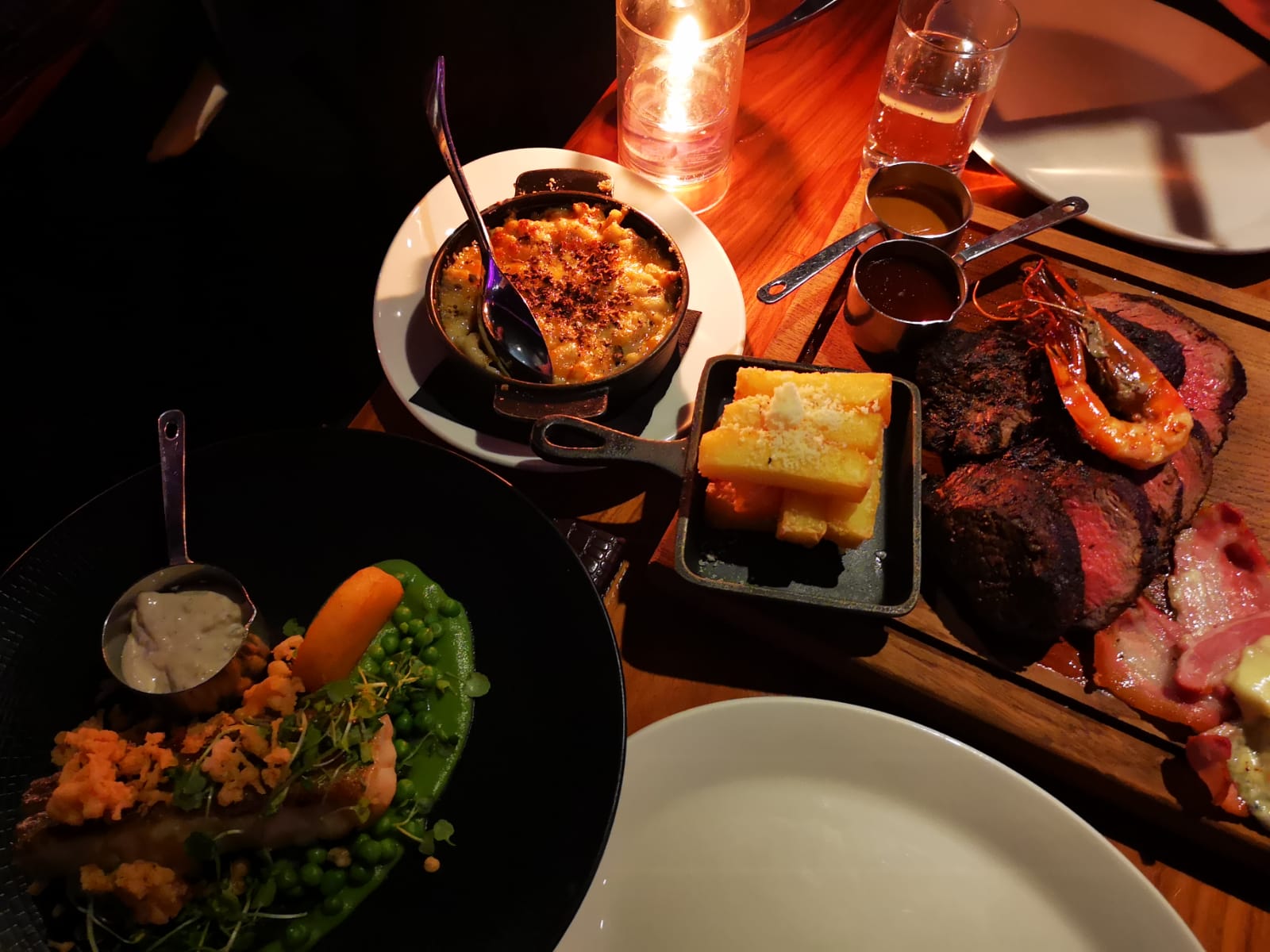 Being huge lovers of all thing’s truffle (if you couldn’t tell from the above), we had high expectations for the Truffle Mac & Cheese and I’m pleased to say it didn’t disappoint. If there’s one side that I can recommend here, it would be this one. Generously portioned, covered in truffle and perfectly cheesy. Ugh.

By the time we finished our main, we were (rather embarrassingly) too full for a dessert and decided that we didn’t want to spoil all of the deliciousness we had just devoured. The music was also blasting and a few more tables of party-goers had been seated, so we figured it was time for us to leave.

I left feeling a tad dazed and with my ears ringing, but equally happy and satisfied with our evening’s dining experience.

STK is certainly an experience, probably one that isn’t for everyone, but the food is truly tremendous and correctly lives up to the hype.