Choose any direction on your compass – north, south, east, or west – and you’ll discover a beautiful beach on Mauritius’ shore. Rainbowed reefs shield the coastlines in certain areas, forming bays as flat as stained-glass windows. In others, currents pull at the sea, and surf-perfect waves appear on the horizon. These Mauritius beaches are the place to go whether you want to swim or sunbathe.

While your Mauritius resort will undoubtedly have its own beach, nothing beats discovering what’s around the next corner. Mauritius’ beaches will mesmerise – and they are all open to the public. Locals love lounging on the sand just as much as tourists, therefore most beaches are busier on weekends. Keep an eye out for currents and cautions, since not all areas of the island are suitable for swimming. On wilder beaches, where coral knobbles commonly litter the shore, you should wear shoes. On that point, don’t forget to pack your snorkel if you want to see reef fish in some of the prettiest water around. 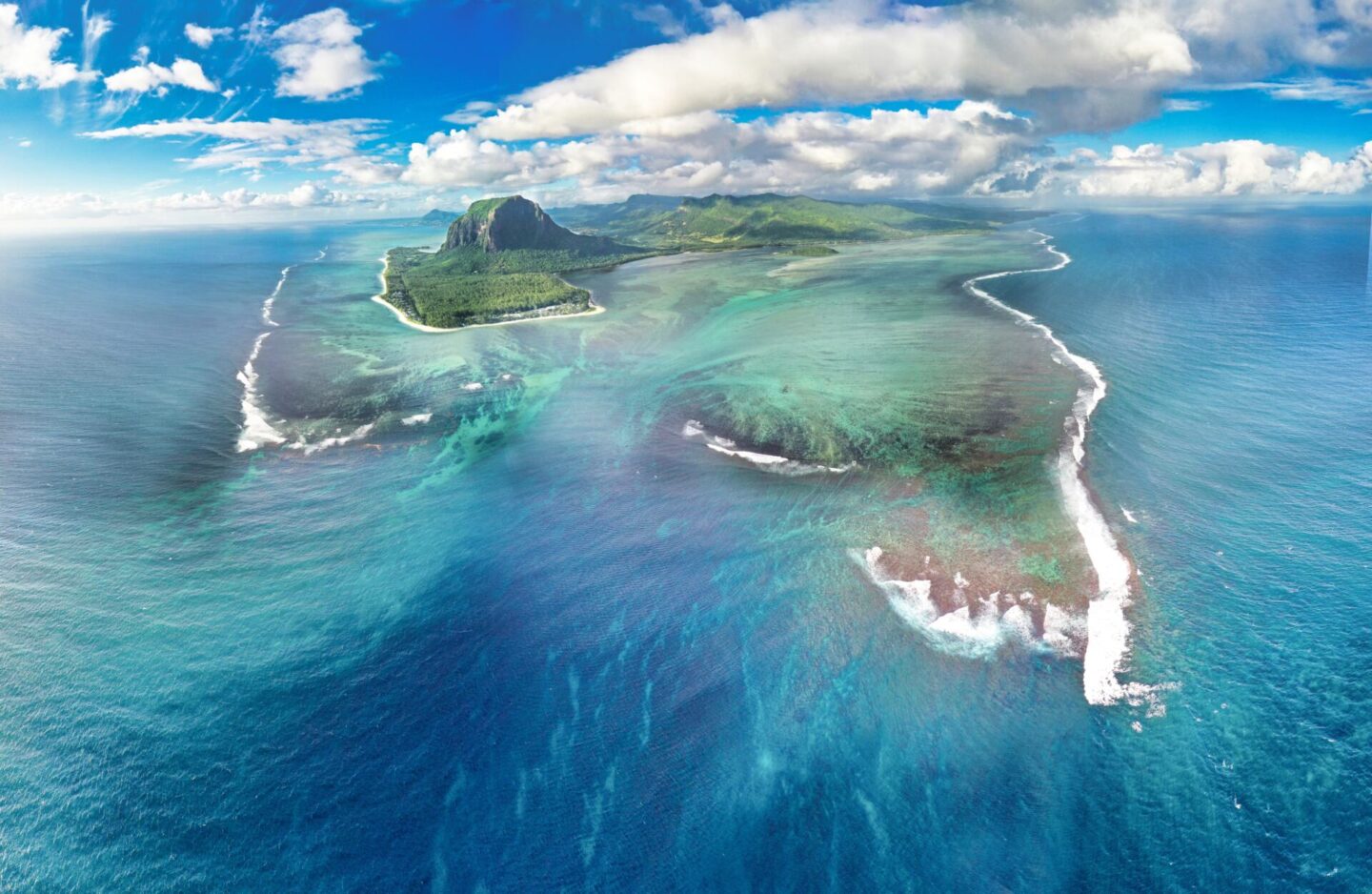 The east coast of Mauritius has a sophisticated image to uphold: it features the whitest beaches and the coolest resorts. Because of the predominant south-easterly breeze, expect swift currents, atmospheric sunrises, and windy weather.

The bijoux Ile aux Cerfs off the east coast of Mauritius is a terrific day excursion. People come to this island on their own or as part of cruises from Trou d’Eau Douce. You’ll enjoy the upper-class castaway vibe regardless of how you arrive. It’s stunning, covered in Mauritius’ ubiquitous Causarina trees, and its jigsaw-puzzle form carves out plenty of beaches. You can walk around Ile aux Cerfs in a couple of hours, and you’ll see plenty of cruisers enjoying cocktails and seafood grills on the beach. Avoid weekends if you like your paradises to be empty of people.

Ile Aux Cerfs is renowned for its golf course, which is part of the magnificent Shangri-La’s Touessrok Resort and Spa. The 18-holes are in such a stunning surroundings that it may influence your handicap. The five-star Shangri-La’s golf isn’t the only surprise in store for its guests: there’s also the exquisite Frangipani spa and the hidden Ilot Mangenie — a private island refuge for gourmet lunches.

If you want to have a more intimate experience on Ile Aux Cerfs, stay at the Four Seasons Resort. The hotel provides speedboat trips to its own private beach on the island, so guests may immediately feel the softest, whitest sand under their toes. On the island enclave, the resort has set up a Beach Grill, which is filled with fresh catches from local fisherman.

In addition to its beach on Ile Aux Cerfs, Four Seasons features two isolated beaches on the mainland. This resort is discrete and opulent, with luxury villas scattered amid green gardens and hammock-strung palms — so you can enjoy quiet and seclusion – emerging just for meals at a variety of superb restaurants. A free 18-hole golf course is also available.

Find tranquil beaches popular with children, as well as dazzling sunsets that illuminate the yellow sand.

Tamarin is a popular Mauritian hangout since it is rugged and untamed and with the majestic heights of La Tourelle as a setting, it surely looks the part. Tamarin is the greatest surfing place on the island since it is surrounded by a reef that funnels in waves. You may also play in the waves on a body board, but be cautious of currents. The island is also usually wonderful for dolphin watching, whilst Tamarind trees, which give the beach its name, provide shade. After a long day of lazing, grab a snack at Frenchie Café in town and pick up some surfing pointers from other customers. Then return to the beach for sundown. Tamarin, like the rest of the west coast, has spectacular sunsets.

If you’re looking for a more rustic Mauritius, stay at La Pirogue Resort and Spa. Charming thatched houses spread along the coast are among the freshly renovated accommodations. You’ll feel as though you’re on your own little island paradise.

Mauritius’ developed north coast boasts several of bustling beaches, notably built-up Grand Baie, but you’ll have to look about for a quieter area.

The picturesque Mont Choisy beach in the northwestern section of the island is long, sandy, and wonderful, with terrific swimming water. It’s around 5 kilometres from Grand Baie, and while cheap buses go there, the region is usually quiet and tranquil. Fishing boats bob softly in the sea, and loungers may relax in the shade offered by the beach’s long line of trees. When you’re done sunbathing, grab your towel and make your way along the main road, where there are a slew of snack shacks. It’s all close north of Trou Aux Biches, a popular beach that’s well worth a visit.

The vast Maritim Resort & Spa, an All Inclusive resort built within magnificent, flower-filled gardens, is located near Baie Aux Tortues (another wonderful beach). There are numerous things for your family to enjoy at this beachfront getaway, from gliding over the water by Hobie Cat to kids club fun in the sun or beach yoga.

Zilwa Attitude is a popular four-star All Inclusive resort with a lot of local flavour, from its rustic-chic accommodations to its traditional Indian Ocean food. Beachgoers will enjoy excursions to Gran Zil, a desert island off the coast, for a barbecue.

The southern part of the island, known as the picturesque south, has a mountainous coastline with several bays, coves, and off-shore reefs that are ideal for snorkelling, where the adventurous can explore the wilder side of the island.

A kitesurfing beach can be found in the shadow of the sombre clifftops of Le Morne Brabant. Expert riders are swept through waves parallel to the coast by a strong breeze. Hold on to your hats, spectators. While you’re here, go to Le Morne Brabant – t he peninsula, which was formerly a haven for escaping slaves, has a terrible legend as several slaves jumped to their deaths from the rocky heights to avoid capture. It is currently a World Heritage site and one of the island’s top treks.

From its iconic red telephone booths (for ringing home and telling everyone how much fun you’re having) to its pop up cinema and secret bars, LUX Le Morne injects some levity into Mauritius’ luxury hotel scene.

Shandrani Beachcomber Resort is a spacious, elegant All Inclusive resort on the southeast end of Blue Bay marine park, with one of the greatest beaches on the island just next door: check out Wild Beach to take in its jaw-dropping beauty.